Origin and Diversity of Bilins. Most linear tetrapyrroles (bilins) found in nature arise by oxygen-dependent cleavage of the metalloporphyrins, heme and chlorophyll. Heme is quite susceptible to oxidation, and in the presence of reductant and oxygen via a process called coupled oxidation, heme is readily converted to a mixture of alpha-, beta-, gamma-, and delta-isomers of biliverdin, a blue-green pigment, along with release of the heme iron and carbon monoxide. Catalyzed by the canonical enzyme heme oxygenase in cells, this reaction typically is regiospecific and affords the biliverdin IXα isomer exclusively (Scheme 1), although some heme oxygenases yield other isomers, e.g. those found in insects. Heme oxygenases are found in nearly all living species including animals, plants, fungi, protists and most aerobic bacterial species. The conversion of heme to BV IXα consumes three molecules of oxygen in a process requiring at least six electrons mediated by a flavoprotein reductase or a ferredoxin cofactor. The heme oxygenase protein scaffold is built so that no reactive oxygen species are released during catalysis. As such, heme oxygenases ensure that released heme is captured and safely destroyed when hemoproteins, like hemoglobin and cytochromes, are denatured and turned over. Heme oxygenases also ensure that the heme iron is recycled upon its release, as iron often is a limiting nutrient in the natural world. 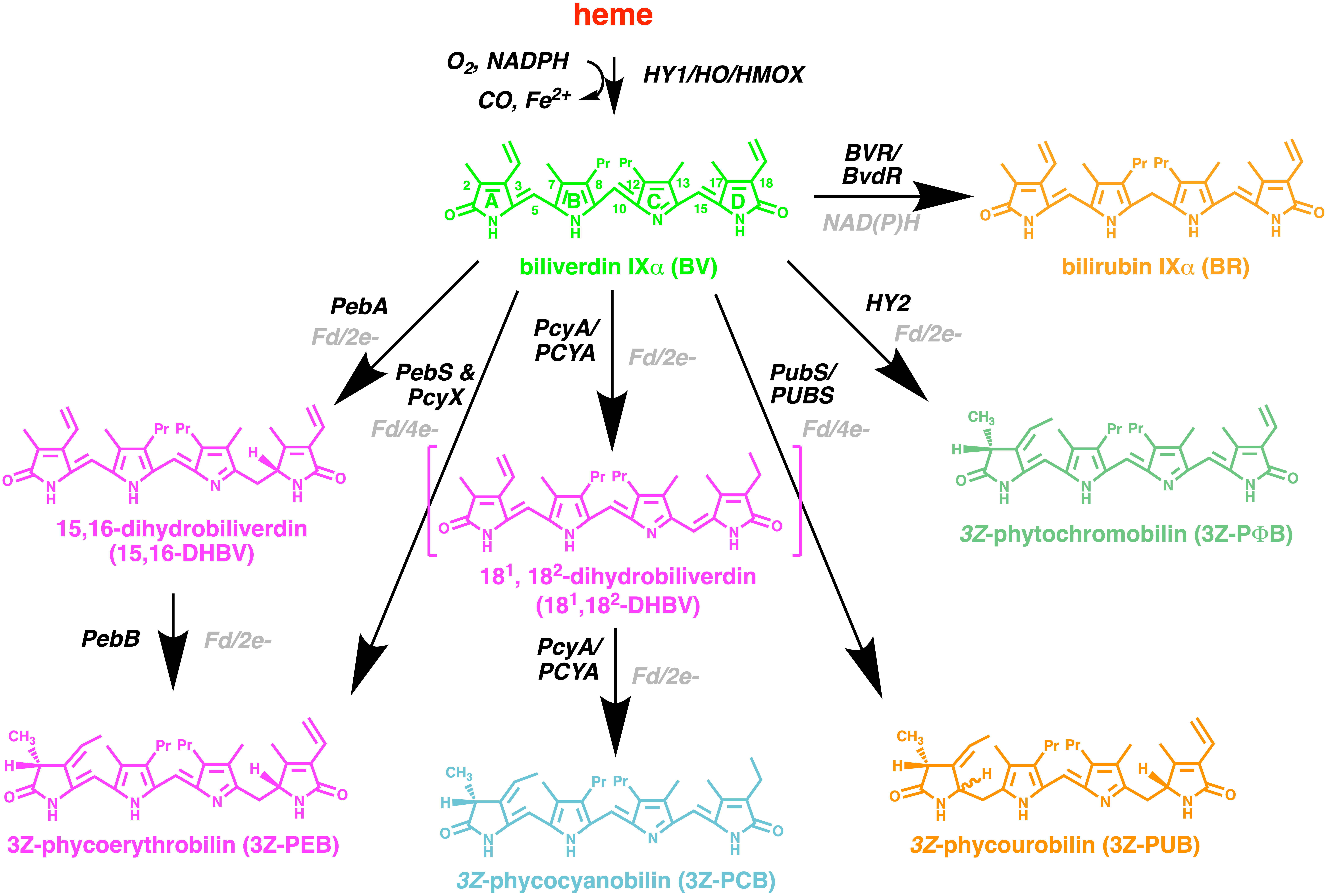 Scheme 1: Bilin biosynthesis from heme. Heme is converted to biliverdin IXα (BV) by the enzyme heme oxygenase (HO, in animals and bacteria, HMOX in fungi/yeast and HY1 in plants). This oxygen-dependent enzyme is supported be electrons provided by reduced ferredoxin or cytochrome P450 reductase. BV is converted to bilirubin (BR) by NAD(P)H-dependent biliverdin reductase (BVR or BvdR) or by members of the Ferredoxin-Dependent Bilin Reductase (FDBR) superfamily to generate the various phytobilin pigments.

The fate of biliverdin depends on the organism (Scheme 1). In birds and reptiles, biliverdin is excreted and/or used as eggshell pigmentation, while in humans, biliverdin is converted to bilirubin IXα by the NADPH-dependent enzyme, biliverdin reductase found throughout our body. The process of heme turnover and conversion of biliverdin to bilirubin is recognizable by the characteristic color change of blood released in a bruise from red to green to yellow. Unlike biliverdin, bilirubin is hydrophobic and must be conjugated with glucuronic acid by liver enzymes prior to its excretion in our bile. The hydrophobicity of bilirubin accounts for its neurotoxicity when it accumulates to high levels in patients with liver disorders or in premature newborns. Fortunately, neonatal jaundice can be treated with blue light which increases the solubility of bilirubin so that it can be removed in the urine. This photochemical property of bilirubin is exploited by other bilins in the phytochrome superfamily.

The metabolism of biliverdin differs in oxygenic photosynthetic species, i.e., plants, cyanobacteria and algae. These organisms possess a family of enzymes known as the ferredoxin-dependent bilin reductases (FDBRs) that mediate the reductive conversion of biliverdin to a wide variety of reduced phytobilin products (Scheme 1). The arrangement and number of double bonds of these phytobilin pigments is responsible for their intrinsic color which are strongly tuned by the proteins to which they become bound. Phytobilins function as light harvesting chromophores of the phycobiliprotein antennae pigments of cyanobacteria and other algae, and of the photochemically active chromophores found in the phytochrome superfamily of light sensors (Project 1). Bilins also function as regulators of chlorophyll synthesis (Project 2). The association of phytobilins with proteins determines whether these pigments are fluorescent, photochemically active or capable of dissipating excess light energy by rapid thermal deexcitation.

The Phytochrome Superfamily of Biliprotein Light Sensors. Phytochromes and their relatives are light sensing biliproteins widespread in nature. Phytochromes and their distant cousins, the cyanobacteriochromes (CBCRs) found in blue-green algae, a.k.a. cyanobacteria, sense light via light-driven double bond isomerization of their protein-bound bilin chromophores. Similar to rhodopsins in our eyes, phytochromes detect the color, intensity and duration of light in the environment, triggering adaptive programs of behavior responses and longer term acclimation responses via changes in gene expression. Phytochromes and CBCRs are not only essential to successful growth and development of photosynthetic species, including plants, algae and cyanobacteria that rely on light as an energy source, but also many non-photosynthetic species, where they also function to entrain metabolism and reproduction with the circadian light-dark cycle.

Phytochromes are especially important for plants where they function to respond to the presence of neighboring plants by sensing the reflected or transmitted wavelength of light therefrom. Plant phytochromes respond to red and far-red light, which triggers the reversible photochemical interconversions between red-absorbing Pr and far-red absorbing Pfr forms. In this way, phytochromes distinguish between direct sunlight and red-depleted shade light initiating ‘shade avoidance’ responses, i.e. rapid stem elongation, altered leaf architecture, early flowering, designed to outgrow their neighbor or to support seed dispersal to a better light environment (Scheme 2). Since shade avoidance contributes to significant crop yield reduction in high-density plantings, our understanding of the molecular basis of phytochrome signaling has already lead to new approaches to sustain yields at higher plant density. 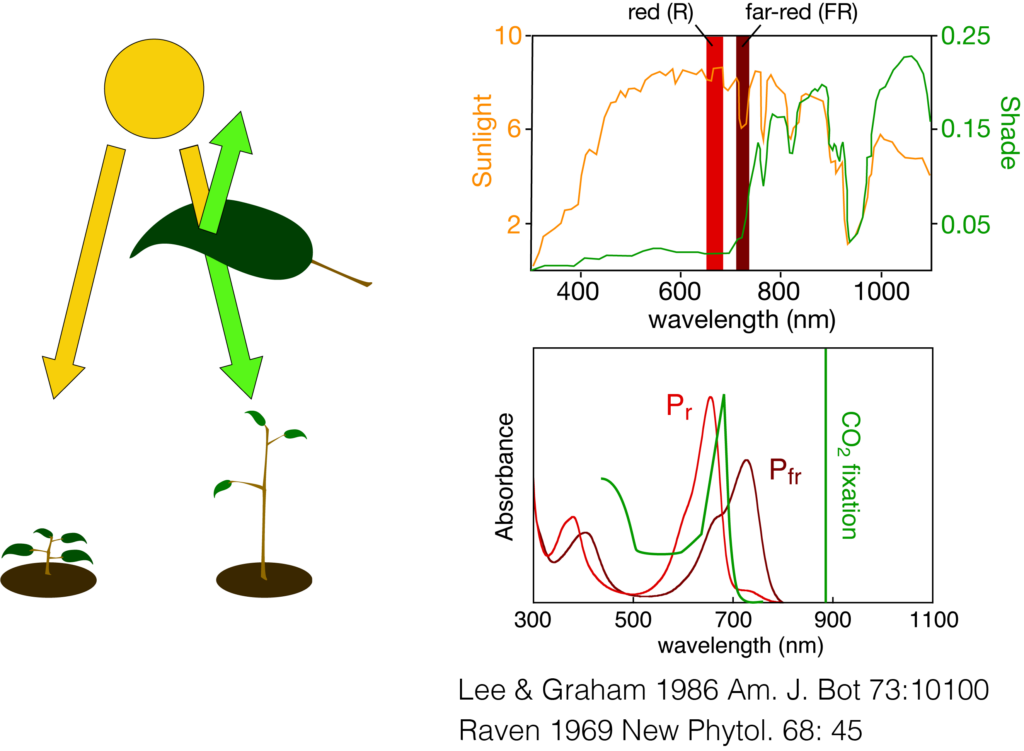 Scheme 2: Shade avoidance and plant phytochromes. Plant phytochromes regulate shade avoidance responses, i.e. rapid stem elongation and early flowering, by sensing the ratio of red and far-red light which differs in full sunlight (upper trace, orange curve) or shade light transmitted or reflected from neighboring plants (upper trace, green curve). The spectra of the red-absorbing Pr and far-red absorbing Pfr forms of phytochromes (lower trace) are ideally suited to detect this difference which is due to the absorption by chlorophyll for optimization of photosynthesis.

Phytochrome function requires three domains, named PAS, GAF and PHY, none of which can be removed without affecting the photochemistry of the bound bilin chromophore. This PAS-GAF-PHY tridomain, termed the photosensory module (PCM), is present in all phytochromes from bacteria to plants. Covalently linked via a thioether linkage to a conserved cysteine residue, bilin chromophores of phytochromes interact with strongly conserved GAF-domain residues critical for their red/far-red photocycles and for the transduction of the light-induced changes in bilin structure into changes in the signaling activities of protein kinase output domains. Prolonged molecular evolution of phytochromes has occurred in cyanobacteria that has yielded even more spectral diversity: knotless phytochromes with a smaller PCM that lacks the PAS domain, and cyanobacteriochromes (CBCRs) whose stand-alone GAF PCMs are sufficient for bilin attachment and for sustaining a wide range of photocycles that span the near UV to near IR region of the light spectrum (Fig. 1A and B). The structural basis for this spectral diversity and for coupling the bilin photochemistry with regulation of a wider variety of signaling output domains, including adenylate cyclase and other second messenger producing output modules (Fig. 1C and D), are the ongoing focus of the laboratory.

By elucidation of linear tetrapyrrole (bilin) biosynthetic pathways in plants and cyanobacteria, we have developed widely used tools for expression and reconstitution of phytochromes and CBCRs. This technology has facilitated high-resolution structural analyses on these regulatory photosensors using x-ray crystallography, NMR and ultrafast spectroscopies by our collaborators and colleagues. In addition to our discovery of a new class of genetically encoded fluorescent protein probes (phytofluors), our research has fueled growing interest in optogenetic and synthetic biology applications of phytochromes in mammals. Our discovery of constitutively active alleles of phytochrome resulted from a screen for fluorescent, photochemically inactive mutants, which was based on a clear understanding of excited state dynamics. Indeed, the ability to ‘store’ the energy of a photon as potential energy of a metastable ‘active’ protein conformation underlies one of the central questions we address as a laboratory.
Select Project 1 or Project 2 for further details about the research approaches and questions under study in the lab.